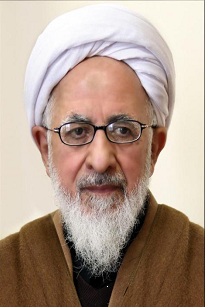 Ayatollah Javadi Amoli:” The Holy Prophet would never swear even at the idols”.

Grand Ayatollah Javadi Amoli said:” we do not live alone in this world; we have national, regional and international problems, which must be settled wisely. Both the issue of association and dissociation ( tavala and tabara) and security must be taken into account and this is a political and social matter.

”The Ahzab chapter, which centers around political and governmental issues ,was revealed in Medina. Medina chapters deal with and explain the establishment of military system and the base of economics in Islam. In the Ahzab chapter, marjufoon have been mentioned. Those who stir up sedition spread groundless suspicions and nonsense rumors over the society. Seditious news is a piece of news which has no solid foundations. Such news leads to social unrest. In Ahzab chapter, the phrase “oh the prophet” has been repeated 5 times and this highlights the importance of this issue .This phrase is followed either by military or family issues .The family problems that can later engender many dangers may not seem so threatening at first. God says:

“Oh consorts of the prophet, you are not like any of the other women”.

This verse shows that from that house dangers may befall the society.

as the battle of camel took root in this house.

The prophet never swore even at the idols

Referring to the verse

“Oh prophet, fear Allah and hearken not to the unbelievers and hypocrites, verily Allah is full of knowledge and wisdom,” he stated:

” it must be known that the establishment of a government is not an easy task.

يَا أَيُّهَا”oh prophet” is used for warning, informing and reminding the sensitivity and importance of this issue. Nowhere in the Holy Qur’an does God address the Prophet by his name. The aim in Al-i-Imran or Fat-h chapters, in which God addresses him by his name, is to inform people that he has a status as Rasool-Allah or Nabi-Allah (the messenger or prophet) and wants to emphasis his position .God does not treat the Holy Prophet like the other prophets, and this indicates that we, too ,are bound to speak about the Prophet respectfully and politely.

The outstanding interpreter of the holy Qur’an remarked:

“In the first verse of chapter Ahzab, God tells the prophet: be virtuous, as you have an important mission ahead, which can be accomplished only through piety and virtue. War and bloodshed lie ahead; many of your companions will be imprisoned or killed; many of your most beloved family members will lose their lives; you will be taunted and offended; this path can be traveled only with piety. If this prophet had decided to treat the society the way an ordinary man would, it would be difficult .he, therefore, had to be pious. The Prophet Ibrahim (PBUH) and his son Ismael (PBUH) built the ka’ba. After a while, it turned into an idol-temple where all the idols were kept. Not even once did the Prophet swear at them .He said they can do nothing. If you wish to live a peaceful life, without accusing the others of heresy, and to prevent the daily ruthless massacre in Myanmar, Bangladesh and the East, you need to follow the ways of the Prophet. Not even once did he curse the idols.

“ Step in the right path as best as you can ,and God will help you too. There are certain procedures in order to establish an Islamic society and government :one must observe the public and social courtesy and politeness, and deal logically with the idol worshipers .Swearing at the idols is of no use , it’s no use cursing and damning .we do not live alone in this world; we have national ,regional and international problems and conflicts ,and these must be settled wisely. Both the issue of association and dissociation ( tavala and tabara) and security must be taken into account ,and this is a political and social matter. The jurisprudential issues must be dealt with by the religious authorities, but both the principal of association and dissociation ( tavala and tabara) and safeguarding the security of Muslims must be taken into consideration , and this is not less important than the issue of nuclear energy .On the one hand, constant cursing and swearing ,and on the other hand continual massacre is witnessed every day. This matter eventually has a solution. Do we have to just sorrow over the daily massacre happening in Myanmar, Pakistan, and Bangladesh? If this religion is meant to maintain the security, this problem can not merely be solved jurisprudentially by the seminary schools; it requires negotiation and diplomacy. Is sorrowing and weeping in funeral ceremonies the only thing we can do?

In response to a question about cursing and swearing, he maintained:

“On them is Allah’s curse and the curse of angels and of all mankind”.

Both we and the others approve of generalities .Cursing applies to generalities, but this should not be the case about the details. Previously, if a crown prince died at the time of war between two countries, a ceasefire was called for a week, and then the war was continued, but now, when the king of Saudi Arabia dies, some distribute nuts and sweets among people! This is neither obligatory, nor recommended, nor sensible, nor common. These actions can be prevented. Then we expect the Saudi officials to give the pilgrims red carpet treatment! The jurisprudential and scientific activities done by the seminary schools are indeed of a great value, but in order to be globally enforceable, all people and countries must make contributions, the way they cooperate in unison with regard to the issue of nuclear energy. How long should these pains and grieves be tolerated?